The Eastern Nebraska Gun Club (ENGC) holds monthly Mid-Range (600 yards) F-Class matches April through October on the 4th Saturday of each month. New shooters are encouraged and welcome at any match. Shooters who participate in at least two matches will have their scores submitted to the NRA for classification at the end of the season. The league match course of fire is 60 shots for record, with unlimited sighters on the first string of fire (20 shots) and two sighters on each of the second and third strings (20 shots each).

ENGC F Class matches are held on the fourth Saturday of each month, April through October. Preregistration and payment is required for all shooters and is accomplished on the Practiscore website. Practiscore registration must be completed prior to noon on the Friday before the match. The normal registration fee is $20 and is collected by Stripe (a online payment processor) on the Practiscore website. Late registration is at the discretion of the Match Director, and costs $30. See the Match Bulletin for complete information. Match Schedules can also be found on the ENGC website under the schedule tab. For registration help, please contact the match director, Herb McClannan at [email protected].

The use of electronic targets (ShotMarkers) is now firmly established, and competitors will no longer pull targets in the pits. Competitors will act as score keepers for the shooters and will keep a paper score sheet for each string of fire. Each shooter must bring a web browsing device such as a cell phone or tablet with wifi access. If you are unfamiliar with the Shotmarker system, it will be helpful to skim the manual before attending a match.

Please sign up for our email list to get occasional updates and information regarding F Class at ENGC. 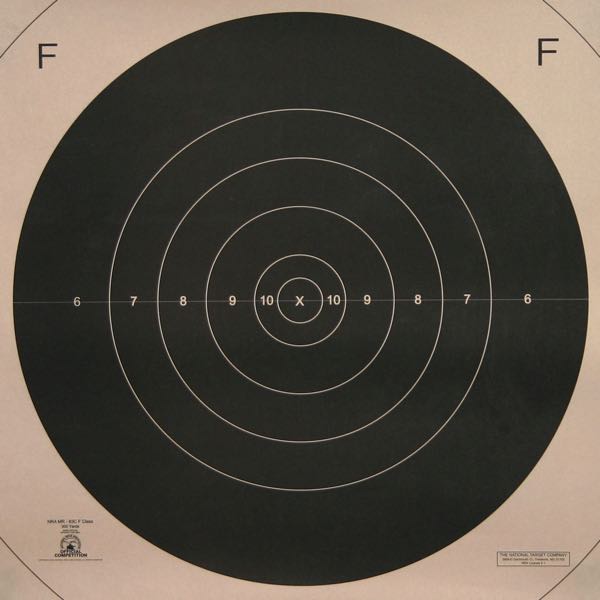 F-Class, a subclass of NRA High Power Rifle, is one of the nation's fastest growing shooting sports. F-class is shot prone at distances from 300 to 1,200 yards. Competitors may use almost any caliber rifle (up to .35 caliber), a scope, a rear rest (bag), and a front rest or bipod. F-class is an ideal sport for beginning competitive shooters male and female, young and old.

F-class is target shooting with scope sights and artificial support allowed, unlike conventional NRA High Power Rifle, which allows only the use of a sling for support. It started in Canada as a means of keeping older shooters in the game after they started having trouble seeing iron sights and getting trussed up in coat, glove, and sling. It has spread to the US, and is now supported by NRA and attracts both tactical style marksmen as well as those geared towards the precision aspects of Benchrest shooting.

At ENGC, F-Class is shot at 600 yards, which designates it as Mid-Range. Shooters are classified by previous match performance (marksman, sharpshooter, expert, master, or high master) and broken into two equipment classes:

F T/R Rifles must be shot off a bipod attached to the gun with a rear sandbag allowed, weight limit 8.25 kg (18lb) scope and bipod included, no limit on scope power, any safe trigger pull, any safe load. F T/R Rifles must be chambered in either .308 Winchester or .223 Remington. There are no bullet weight restrictions.

F Open rifles can be any caliber under .35, and are usually shot off a front rest. Any rest is acceptable as long as it does not return the gun to battery and does not connect the front and rear rests. The rifle's weight limit is 10 kg (22lbs), not including the rest(as long as it is not attached to the rifle).

The F Class target is similar to the conventional High Power Rifle target, although it has smaller rings at the center. The ten ring is approximately one-MOA (that’s 6″ at 600 yards) and a ½ MOA “X” ring is used for determining ties.

Please note that muzzle brakes are not permitted under F Class rules - the concussion is unpleasant and distracting for the shooters to the left and right. Please remove any muzzle brake from your rifle before shooting a match.

The range is located in Louisville, Nebraska, about 30 minutes south of Omaha.